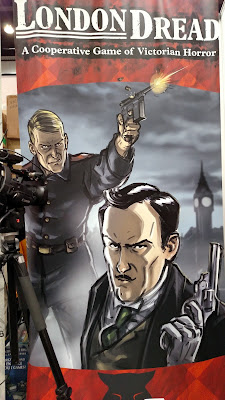 I survived Gencon (mostly) again once more this year. It was a great time, albeit a little different than normal since we were staying in a different hotel from years past and the Hopeless Wife couldn't attend. I've also heard murmurings that they set once more a brand new attendance record. For my two cents, it was definitely crowded at times, but Indy continues to adapt and offer new experiences for the ever-expanding crowds.

For my first post-Gecon post I wanted to focus on the game that excited us most coming away from the show. On Thursday my brother and sister, along with yours truly, got a chance to sit down for a full introduction session of a brand new game called London Dread by Plotmaker Games. To be honest, there's not a whole lot of information out there other than it's a Danish game and what I took away from playing it at Gencon.

First off, the game is a lot of fun from a first play-through. It's 100% cooperative. We played with four people, but apparently it plays 2 to 4. I imagine solo play is definitely possible, but there's a timing mechanism that makes that a TON of information for one player to handle.

You're playing a group of investigators in Victorian London. There a number of scenarios, and in our scenario we were trying to hunt down a killer by dealing with different locations and plot events. It feels very much like a role-playing game set up. I'm not sure how the replay would work on this, but given that the locations are randomly assigned challenges, there puzzle possibilities are really, really high. 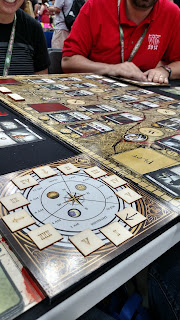 The game is played over three phases. First, and most terrifying is a 12 minute planning phase timed by a recording with some neat narration about the story. It's a lot like Space Alert or for you older gamers, Omega Virus. During this time you're working with the other players to plan out exactly where your character is moving through out the investigation. Once the 12 minutes is up, each character is locked into the movements and locations.

This matters because each character, as you might expect, has a unique set of icons/skills. Each location is randomly assigned challenges, and in this 12 minutes you have the option of turning as many of the location cards face up to plan where your character is going. This was that perfect kind of stress that really drives you rather than paralyzes you, at least that was the case with us. It was frenetic, it was chaotic, and it's a TON of fun.

Next is the phase where you go through the clock and each character contributes to the location challenges. This is not timed and is generally a huge relief after the first phase. There is a press-your-luck quality to this phase. When you beat a location, that card goes on a pile of cards that players can then draw and discard from for a one-time boost on a later challenge. If you don't beat the location, it stays and adds to the threat level. If you reach a certain threat level, you're done, and the goal of the game is to reduce your threat down to zero to win. How do you do that? That's the next phase. 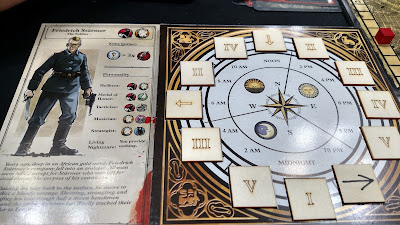 After the day is complete, for our scenario, we had to try to stop an evil cult from performing a ritual. This is the third phase, and each character has a chance to reduce threat through over-coming challenges specific to the ritual.

And that's it! Well of course that's not totally it. There's a lot more, and I think the game presents a very healthy balance between player agency and the randomness of the icons and challenges encountered. We ended up losing our game, but it was still very fun, and it was very difficult to tell we were for sure going to lose until right up to the end. It was close. 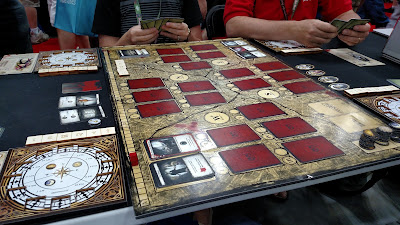 I'm very much looking forward to the release of this game, especially because both my sister and brother are even more excited than I am, so I probably won't have to buy my own copy! One thing that surprised me was how well this game, with it's A/V aspect and a lot going on, demoed really well in the convention hall. The guy running the game did a great job, and the flavor and production value, even as a prototype, were extremely high. Keep a look out for this one!
Posted by The Hopeless Gamer at 6:08 PM

Email ThisBlogThis!Share to TwitterShare to FacebookShare to Pinterest
Labels: All Things Gencon, Board Game