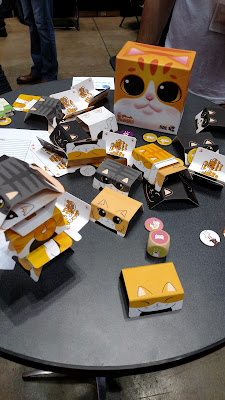 I thought as part of my Gencon 2015 recap it'd be fun for me to write (and hopefully you to read) a review of what games I played. I tried to take pictures of every game I played and in almost every way succeeded!

For the purpose of this post I'm leaving out London Dread which I wrote about in its own post. I'm also going to leave out a summary of the Warmachine games I got to play as I'm saving those for a future post about playing Warmachine at a convention like Gencon.

Those two disclaimers aside, here's what I played!

The first game (and not in order of what I played, just the first game I'm writing about) wasn't actually quite a game yet. Look to the right of this text right now. See that face on that little box? Those adorable GIGANTIC kitty eyes? All the folded up little boxy kitties on the table in front of it? This was my game that I most wanted to learn more about.

Kitty Tower doesn't have a lot of info out about it. It was at the IDW Games booth, and the only info that had to share was that the game is hopefully coming out next year with full rules. For now, it was as simple a game as could be - just stack a bunch of kitties! I played against my brother and sister to see who would get to the seventh kitty stacked. I'd like to think my experience with my own two kitties (who are notoriously difficult to stack in real life) gave me the experience I needed to win. At this point I'm hoping to get a lot more info about the game, but stacking cats? You had me at hello. 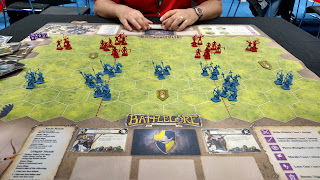 Next up is my brief Fantasy Flight Games demo notes. First up is the second edition of Battlelore. We got to play a quick introductory level where I played some imperial guys, and my brother had the chance to play a soon-to-be-released undead army.

We'd played Battlelore first edition a LONG time ago and have since played a fair bit of Memoir '44 and a tiny bit of Battles of Westeros, which are all based on the same game engine. I generally find it to be a fun, light, strategy game. I know my brother had fun too, but he thought the undead army was a bit lacking in power compared to my imperials. I'm inclined to agree. Their spear men had a fun press-your-luck mechanic where the unit gets stronger the more members of that are dead. We found it just made them pretty fragile. It's still a fun game, but I think there's a lot of competition out there for its spot. 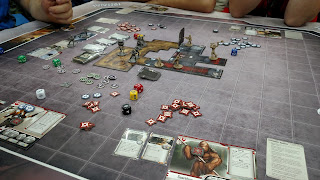 Next up was a chance to demo Star Wars: Imperial Assault. Like many of FFG's games, they took a game system, in this case Descent Second Edition, and adapted it to work with one of their big properties (arguably the biggest property of them all) - Star Wars.

Imperial Assault is not a brand new game, but only my big brother out of the three of us who demoed the game had a chance to play it before. I'd played Descent First Ed and was excited to get a chance to try out Imperial Assault.

IA is an intimidating game. Not because of the mechanics, which are actually quite simple and straight-forward, but because of the investment. Like Descent, IA is a bit of an expansion treadmill. There are TONS of small one-off and big box expansions out and planned to come out.

I liked the scenario we played. I played a Wookie with a vibroaxe and actually didn't pull off a single attack for the whole game. All the shooters got to the enemies before I could really do anything because I grabbed the chest at the beginning of the game. I imagine the scenario was much shorter than normal, and I still had fun sitting with people, but I'm honestly not surprised a non-Jedi melee character didn't do a lot. Unlike a fantasy setting like Descent, this is a game full of guns. Not sure how to solve this problem, Maybe one of the countless expansions would give a melee character a better chance. The good news on this one is that if you know Descent, you'll know how to play IA. Perhaps the Star Wars paint job on top of those rules is enough for you to own both games. I'm not entirely convinced.

I also got a chance to play a game of the new Games of Thrones the Card Game LCG from FFG. I played a lot of aGoT back in the day when it was a CCG and tried to get into the LCG when it converted, but the game lost me. I liked the things I read about the second edition and thought it might be my chance to jump back in as I'm a big fan of the LCG format.

We played Stark versus Baratheon (me), and I got trounced. The game is not any better than before in my opinion. I had no agency as I quickly got crushed by the Starks. The worst part about this game is the death spiral. Both players play to get 15 power first, and you can do things like attack with intrigue or military characters. The third type of challenge is power, and you steal those directly from your opponent. Any time I could sneak by and earn a power from the power pool, I was just potentially feeding my opponent. It needs a MASSIVE overhaul as the game's design is still based entirely on an almost 15 year-old game engine. I can't complain too much though, at least I save money on not impulse buying it at Gencon. 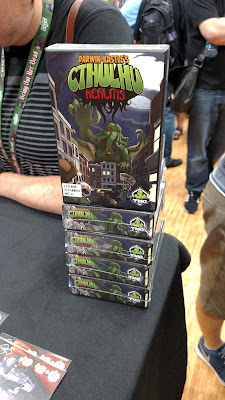 Heading away from FFG we eventually found our way to White Wizard Games, known better for their game Star Realms. I only just started to play Star Realms, and quite enjoy it. It's a deck building game that plays like a quicker version of Ascension with much more player interaction as you directly attack your opponent's resources.

They were demoing and releasing a brand new game, Cthulhu Realms, at Gencon. I didn't actually get a chance to play it myself, but I watched my brother and sister play, and I was very impressed.

If you know how Star Realms plays, Cthulhu Realms is very similar. It plays with a couple more layers of complexity that we thought really added to the game overall.

They limited the number of factions, first off, so you're more likely to build up combos, which if you're familiar with deck builders at all, you'll know that can speed up games and make for much bigger plays much earlier in the game. For a game like Cthulhu Realms with its goofy take on the Lovecraft Mythos and really fun, playful art style to go along with it, that can only be a good thing. 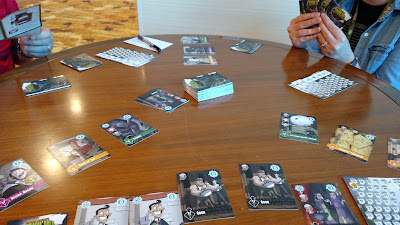 Another nice aspect of the game is that, unlike Star Realms, it plays up to four players right out of the box. We did play a game with three of us afterward, and I've got mixed feelings on it. I like that there are distinct card pools to purchase from between each player (meaning there's always at least one card pool you can't purchase from on the table but the other two players can).

I don't like how you attacked all enemies. I wish you could pick and choose who you attacked. It just kind of played like a two player game that took an extra turn to get to you, and so you got attacked twice instead of just once before it got to be your turn again. I wish there was more interaction. I'd love the chance for players to trade out cards from other pools, or like I said there to be some kind of targetting action. I think this one will play virtually the same at 2, 3, or 4 players, but it definitely feels like it's still meant for 2 players for the quickest, most enjoyable game. 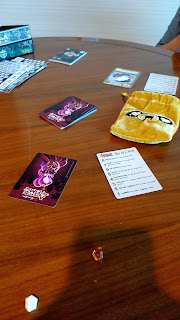 And last for the new games was Adventure Time Love Letter from AEG!

My little sister and her husband are BIG time Adventure Time fans and fans of Love Letter. We've played about three different versions of Love Letter at this point. The game is fun. If you're into board games, you've probably heard about how well it plays. It's all true. It's super quick to play a few rounds. The rules are just as tried and true as ever.

I didn't feel like the Adventure Time theme added a bunch to the core game, but it's definitely fun to look at. My favorite version of Love Letter still to date is Batman as it adds a fun "hunt the villain" aspect of to the game that I enjoyed in the few rounds of it that I played.

If you're a fan of Adventure Time, don't own Love Letter yet, or are a HUGE fan of Love Letter and want to own every copy, you can't really go wrong with this version of the game.

And last but not least was a board game I picked up from the Coolstuff Inc. Ding and Dent section. 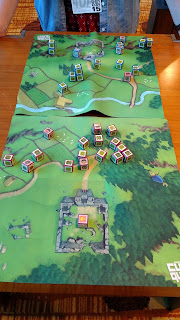 Cube Quest was a game that I had my eye on for quite a while, but given its simplicity, I couldn't quite justify paying full price. Because I got a copy with a tiny little dent on the cover, I picked it up for $17.00! I've played about three games total of this little dexterity-based dice-based wargame, and I already feel like I got my money's worth.

The game is very simple. You each have a king die that you place into your side's castle, anywhere you like as long as it at least touches the castle. You then have a set "army" of specific dice. For our games we played the starter armies, but there are different types of warriors - grunts and strikers are what we used, but there are several more types. Each dice type has a point cost just like a mini in a wargame, and there are army building rules that come along with the game.

You put your dice on your side of the board (which is actually just two playmats like the kind you'd get for Magic the Gathering games). Again, anywhere you want as long as it's on your mat.

Then you take turns flicking the dice at each other, trying to knock the other player's king off the board! Anytime a die gets knocked of the board, the unit dies. Each die has sides with the portrait of the character and just the silhouette. If the silhouette side ends face up on your opponent's side, your opponent gets to roll it. If it lands portrait up, you get to take it back and put in your castle. If it's silhouette side up, it's killed.

That's it! The rules are very simple, but the dice change the rules just like special rules for specific units and figures in miniatures games. It's a lot of fun and goofy. Just make sure to count your dice at the end of your game!

So that's it for board and card games at Gencon for me. I spent most of the day on Thursday demoing and playing different games, and really liked the schedule. It's by far the best day to demo games as the crowd isn't too big like it is on Friday and Saturday, and the people aren't exhausted by Sunday.

My next post is a big Warmachine post, just to warn you!
Posted by The Hopeless Gamer at 1:17 PM