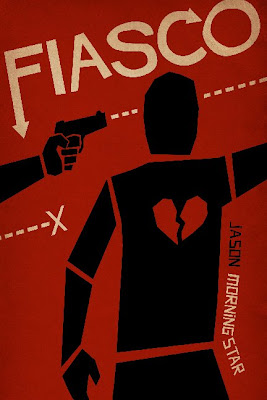 Reservoir Dogs is my favorite movie. I know it's not really a controversial pick, but it's important for the rest of my argument here. Anyway, a while ago I heard of a little game called The Shab-al-Hiri Roach from Bully Pulpit Games. I wanted it badly (still do, sadly), but before I got too close to buying it I saw the cover of the 2010's game of the year - Fiasco - over on the Geek.

Take a look at that cover for a second. From the simplicity in design to the font to the amazing overlapping artwork, it takes a minute to find the real Easter Egg of the game - that little broken heart of this faceless character. I've never seen a cover of an RPG perfectly describe every single game session for an RPG like Fiasco does.

Tons of people have raved about this game, but I'd like to take the hipster approach that we were very early adopters. Back in February we snagged an early interview with designer Jason Morningstar (read it here). Jason was gracious enough to give us some insight into his design process and what makes GM-less games tick.

That's the thing with Fiasco. We've tried GM-less games before, but none click into place as perfectly as Fiasco. It represents a genre where mindless, random acts of God strike characters with merciless efficiency. There is no better rule set to game a Tarantino movie. The real surprise behind Fiasco was just how adaptive the rules were to other genres. Sure you could do Pulp Fiction, but you could also do Coen Brothers, trashy 80's fantasy films, and zombie flicks. There's pretty much anything that you can't make awesome through using Fiasco.

Bully Pulpit didn't stop with an amazing rule book. Month after month we've been getting great new play sets (the scenarios necessary to give both flavor and order to a game of Fiasco) for free via pdf download. Rumors for a Fiasco Companion this year would be welcomed and thrilling to see how exactly Jason and the Bully Pulpit crew can expand on the game. Ultimately the decision for Game of the Year comes down to this - what gave me the most enjoyment this year? There's no competition. Every game of Fiasco has caused me to get a soar throat from laughing so hard and for so long that I was worried I'd lose my voice the next day. I've never played a game of Fiasco that ended up not being fun. What's better than that? Oh yeah, there's zero prep time for everyone in the group. That's kind of the perfect game.

Need some inspiration for your game of Fiasco? Look below - these are all amazing movies that can be easily replicated by the 2010 Game of the Year.

Posted by The Hopeless Gamer at 4:19 PM

Email ThisBlogThis!Share to TwitterShare to FacebookShare to Pinterest
Labels: Fiasco