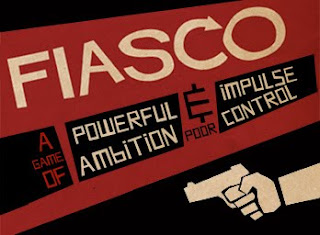 I'd like to introduce our inaugural edition of what I hope to be an on-going series titled "10 Questions" where the title says it all. We approach game designers in the field with 10 questions about their company, gaming experiences, and most importantly a new or classic product that we can't stop talking about here at The Hopeless Gamer offices (there are no offices).

This time we interviewed Jason Morningstar of Bully Pulpit Games about his new game, Fiasco which was just released last month. Jason was gracious enough to take some time out of his busy RPG designing schedule to answer 10 questions for us, and we're eternally grateful! As you can see by the graphic here, the tagline for Fiasco is "A Game Of Powerful Ambition & Poor Impulse Control." The game itself is GM-less, giving each player an equal shot of impacting the story. Here's the "elevator pitch" found at the beginning of the book which will do it much more justice than I could.

"Fiasco is inspired by cinematic tales of small time capers gone disastrously wrong – particularly films like Blood Simple, Fargo, The Way of the Gun, Burn After Reading, and A Simple Plan. You’ll play ordinary people with powerful ambition and poor impulse control. There will be big dreams and flawed execution. It won’t go well for them, to put it mildly, and in the end it will probably collapse into a glorious heap of jealousy, murder, and recrimination. Lives and reputations will be lost, painful wisdom will be gained, and if you are really lucky, your guy just might end up back where he started." Fiasco, pg. 8


1. The Hopeless Gamer (THG): How did Bully Pulpit Games get started?

Jason Morningstar (JM): Steve Segedy, our friend the Mad Irishman, and myself have gamed together for many years and had all the pieces between us - I can't stop designing games, Steve's a great editor, and the Mad Irishman knows layout (see his work here: www.mad-irishman.net). So we figured we'd give it a try.

2. THG: Which RPG designers and creators inspired you as you grew into the hobby?

3. THG: What kind of qualities do you look for in an RPG that brings you back to it time and again?

JM: I like games that are fun, interesting and easy to play. Prime Time Adventures is a game that scratches all these itches very well.


4. THG: What first inspired you to create Fiasco?

JM:  The game's killer app, as far as I'm concerned, is the Setup, where you build out relationships before you know who your characters are. This came out of a different game I was working on that wasn't going anywhere - but I recognized the value of that mechanic and thought about with it would be really good for. I love the Coen Brothers, I love movies like Detour (1945), and saw an engine for telling those kinds of stories maybe.

5. THG: Have there been any fan Playsets that have really surprised you?

JM: It's still early - building a Playset involves authoring a ton of individual elements, so there have only been a few. I was pleased when Max Lambertini made an Italian conversion Playset (www.roleplaying.it/2010/01/fiascon-in-english.html). My friends Chris Bennett, Graham Walmsley, and Tom Gurganus have all written one or more sets; a bunch of these will be "Playsets of the Month" and I don't want to spoil the surprises coming up.


6. THG: What's the worst Aftermath you've ever experienced or seen for a character in a game of Fiasco?

JM: I was in a game where a character ended with zero (the worst possible outcome, worse than death, worse than anything) who ended up abducted by a Sonoran drug gang that had been betrayed by her brother... we sort of faded to black on that one.

7. THG: If people love Fiasco, which of your games should they try next?

JM: It depends on what you liked about it. If you love the dark humor, definitely check out The Shab Al-Hiri Roach (THG: which you can see a picture of the right here). If you are interested in exploring different configurations of GM-less play, maybe Grey Ranks, which is awesome but not exactly a madcap romp.

8. THG: It seems Bully Pulpit Games is developing a specialty in quirky, GM-less games. Are there any special considerations that need to be made when designing (or playing!) this style of RPG?

JM: I talk about this at length in my notes at the end of Fiasco. My games tend to fall into this category because that's what I - and my local friends - enjoy playing. I love being the GM, so it seems natural to spread the authority around to everybody. Games without a GM do require a different approach. You really need to think about how authority is distributed. My friend, Jonathan Walton, who is very smart, broke out GM-less play into several categories:

A. "GMless" with Homogeneous Player Roles
1. Everyone Has the Same Quasi-GM Powers: the best one here may be Universalis.
2. Players Take Turns Narrating Stuff: as in Once Upon a Time and Baron Munchausen.
3. Board-Game-Like Rules, All Players Have Same Role: Montsegur 1244, as far as I know.
B. "GMless" with Heterogenous Player Roles
1. Rotate the GM: Rune is probably the best example of this.
2. Restrict the GM Role + Broaden The Player Roles: every post-Forge game ever, plus some others.
3. Add "More GM's" With Specific Responsibilities: How We Came to Live Here, Great Ork Gods.
4. Carefully Specify Multiple Different Player Roles: Kazekami Kyoko Kills Kublai Khan, probably others.
C. By Our Powers Combined
1. Heterogenous, Rotating Specified Player Roles/Multiple GM's(?): Polaris.
2. Board-Game-Like Rules, Rotating GM: alpha and beta of Geiger Counter.

So as a designer, there are big questions to answer. Is authority evenly or unevely divided? Is authority isolated, binary or universal when invoked? Is authority sequenced or is it a constant? You need to make some decisions about this that, were you designing a GM-centric game, would not be an issue at all. I believe that GM-less games require a little more creativity and engagement from players generally. You can't really be passive or reactive much.

9. THG: I have to say that your game catalog is already quite diverse. It wouldn’t be right for me not to ask for a hint at what direction you may go in for your next game. What can you tell my readers and me about any future releases?

JM: Sure! I'm working on a game called Medical Hospital. You play surgeons; it is a frothy soap opera of lust, greed, and power set in a modern hospital. You resolve conflicts by performing surgical procedures using office supplies - there's a tactile, arts-and-crafts component to play that is pretty unique and fun. It's GM-less and sort of weird. You will learn a lot about the pancreas when you play.

10. THG: How can readers get a copy of Fiasco for themselves?

You can find more games designed by Jason by checking out his ludography courtesy of Bully Pulpit Games. When you pick up Fiasco, you'll notice that it has four Playsets (as close as you'll get to a published scenario or module for Fiasco) already included, but make sure to keep coming back to Bully Pulpit every month as they release new exclusive Playsets - but catch them quick since a new one is posted monthly and the old one goes the way of the dodo. Game Designers! We're looking to expand this series of articles, so if you're willing to subject yourself to 10 hours of gruelling questioning... er, I mean 10 simple questions, shoot us an email at thehopelessgamer@gmail.com
Posted by The Hopeless Gamer at 8:36 AM