Lord of the Rings LCG interview with Producer Jason Walden 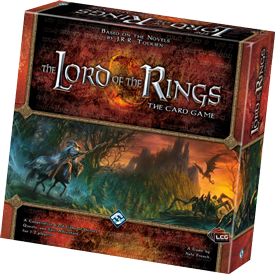 Ok, a couple of things with this post. 1. when the Lord of the Rings LCG game was announced the day before Gencon, I was ridiculously excited, hence this being our first real interview posted. 2. While we don't have the release date, I'm betting I won't be the only one crazy excited for the game. For instance, the Gamer Wife is also stupid excited. 3. This article also starts a mini theme of our Fantasy Flight Games Gencon posts. Check back soon for a photo extravaganza including, but not limited to the Lord of the Rings LCG! 4. Want to listen to the original audio? Check out after the jump for where you can download it!

THG: Brand spanking new. Go ahead and give me the pitch, I guess – we’ll start with that. I don’t know much about it yet.

JW: Lord of the Rings LCG is an LCG in line with our other LCG games like Game of Thrones and Warhammer Invasion. The difference with this game is that it’s actually cooperative – two players are fighting together to beat a single quest objective. So you win as a team and you lose as a team. That’s a special thing that we have here with Lord of the Rings.

THG: I can’t think of any other cooperative collectible card games.

JW: Neither could we.

THG: Was that a big influence? That it’s an innovative kind of new thing?

JW: Well, one of the reasons why we went in that direction was that we felt that Lord of the Rings as an IP really dealt with the fellowship, with a lot of camaraderie, and basically everyone was working against an ultimate evil. And we didn’t want anyone to play an evil side. We wanted everyone to play on the good side, facing a mutual enemy. So that’s how it kind of evolved, was the IP (Intellectual Property).

THG: Okay. So, I notice it’s based on probably the novels as opposed to the movie license.

JW: Yes, we do not have movie licensing.

THG: So that probably gives you guys a lot of freedom. 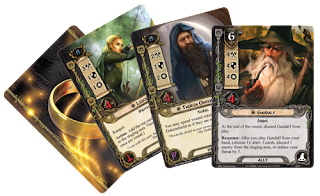 THG: Yes, I see Aragorn here… and he is not bearded, so there you go! So that’s a good example. What else have we got on the table? We’ve got Theodred and Celeborn.

JW: Yes, in the core set there will be twelve heroes, but to simplify for this demo’s sake, we’ve chosen three. And they are replicated on both sides. But you will play with unique heroes on both sides when the game releases.

THG: So I’ve noticed that there’s the Encounter deck… and it seems to me that as a cooperative game it would feel a little bit like a board game, is that right? Kind of how it runs itself?

THG: Okay. And so what kind of things can we expect from the Encounter deck? How does play actually…

JW: I can give you a quick run-through of how play actually works.

THG: Sure, that would be great.

There are three types of cards in your player deck. You have Events which pop out- they happen and they go away. You have Allies, which operate very much like heroes – you place them down next to your heroes and they’re basically almost a mini hero. And the final one is an Attachment, which is applied to either a hero or an ally and makes them better for a certain amount of time. 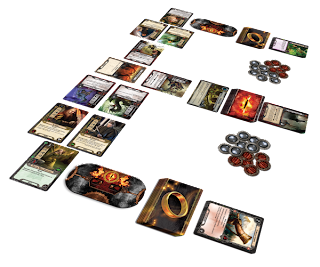 JW: Exactly. So, that’s your deck, and what you’re faced with is this Encounter deck. The Encounter deck contains three types of cards. You have Locations. You have Enemies, which you’ll be combating. And you have Treachery, which is basically an enemy’s event – it pops out, it happens, it goes away.
In order to beat the game, you need to apply damage to this quest card here. And in order to apply damage here, you need to commit heroes to the quest, which will tap them –we call it Exhaust. And you apply their Willpower - which is the little symbol located on the card here – you apply their Willpower to this quest.

So this quest right here needs eight total progress in order to be defeated. These heroes, if they were to commit, would apply a total of five. But, the thing is, each of the cards in your staging area, including enemies and locations, are actually going to block some of the willpower that you’re assigning based on these values here. So they are blocking four. So you really only did one progress this round, to this quest.

JW: Pretty much. The enemies are going to go after the player with the highest threat, and then initiates combat. The way combat works? It’s a straight numbers game, there is no luck involved besides this one element right here that’s called a shadow card. At the beginning of combat a shadow card is placed upside down on the enemy.

At this point you need to decide who you’re going to commit to defend against this enemy’s attack. You choose any of your guys who aren’t already exhausted and you defend against him. Each hero has a defense value, and each enemy has an attack value. If they exceed your defense value, you take that many wounds. But when the shadow card is revealed, certain enemies will get bonuses based on what the shadow card says at the bottom. It’s a single time bonus so it will go away and a new one will come out next time it fights. That’s how we throw a little bit of randomness in the game.

THG: Sure. Makes it a little more fun. Alright, so then we’ve got the starter that was just announced – do we have a date for that yet, or a month?

JW: We are not announcing that yet.

THG: Not yet. And it sounds like you mentioned chapter packs earlier, that they’ll be supported like your other LCGs?

THG: And then the starter’s going to be for 1-2 players, right?
JW: Yes, it will be for 1-2 players. You can play solo, which is another very attractive thing. So you can build a deck and test it out against yourself and build decks that way. It’s 1-2 players for the core set, but with two core sets, you can play 3-4. Or 1-4.

THG: So then is there a plan or an idea for organized play at all? Because it is cooperative. Is there a tournament structure that you guys are thinking about?

JW: There is a tournament structure that we’re working on. What I can say so far about the tournament structure is – as you defeat the quest, you’re assigned points based on how well you did during that quest. Who you killed, how quickly you did it, all sorts of things. We haven’t totally finalized that system yet. Those are going to give every player as a team a score, and those scores are going to be compared at the tournaments.

THG: So do you enter as a team then?

THG: Oh, okay. A 2-player team, or depending on the size of the tournament?

THG: So then does the Encounter deck change for the tournament? Or does everyone just play and see how well they do?

JW: I don’t think we’ve quite hashed that out yet.

JW: Yup, you’re going to get a little of everything. The only thing you’re not going to get is the quest itself – that’s going to come in our bigger box expansions.

THG: So we’re seeing some characters – Theodred only appeared in the extended movie – we’re seeing characters that maybe might not be in the movies at all. So if you might be a fan of the books, you could benefit  from knowing those kinds of characters too?

THG: Right. So do we know yet, or will it be announced what the twelve heroes are going to be in the starter? Beyond these three, obviously.

JW: I don’t think I’m going to go that far yet. We’re pretty close, but I’m not going to talk about it exactly.

THG: Alright. Well, I think I’ve run out of questions. Any parting comments?

THG: Right – it just came out yesterday.The world just found out. Well thanks so much for your time, and good luck!


*All Images are property of FFG. To find out more about the game, go check out the official minisite from FFG.

Posted by The Hopeless Gamer at 6:50 PM