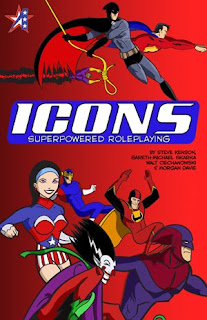 In today's installment of 10 questions, freelance designer Steve Kenson agreed to submit himself to hours of gruelling questions just to bring you, the Hopeless audience and fans of the upcoming Supers RPG, Icons answers to crucial questions like "DC or Marvel?" If you've been following the rpg.net forum thread featuring all the discussion you could ever want about the game, you'll know there's a lot of hype being built around it. Steve also designed Mutants & Masterminds, arguably the biggest Supers RPG in the last ten years. M&M has enough crunch to break a tooth on, and something must have struck Steve - the time is right for a Super game that is lite! And thus we have Icons, set to be released in June and building the buzz of a game that has the chance for true success. I'll let the blurb from Adamant's site give a much better and concise description of the game itself:

"Steve Kenson, the designer of the best-selling Mutants & Masterminds delivers a superpowered new role-playing game, inspired by the fast-playing old-school games and the new generation of narrative role-play! Within its pages are complete rules for character creation, abilities and powers, random adventure generation, a rogue’s gallery of villains, a complete adventure and all the superheroic action you can handle!"

1. The Hopeless Gamer (THG): What games did you grow into the RPG hobby with?

Steve Kenson (SK): I got my start with the gray box 1st edition of Gamma World, which was also my introduction to "super-powers" in RPGs, too, I suppose. My friends and I moved on to the D&D Basic Set and then off to AD&D, and most of the TSR catalog at the time. My high school gaming group played AD&D and Marvel Super-Heroes (which I ran), leading to a regular superhero game. That campaign went through several games, including DC Heroes and Champions.


2. THG: You’ve worked on a lot of non-Supers projects (check out all of the books Steve's contributed to here), which genre do you have the most fun working on?

SK: I enjoy fun fantasy settings: I had a blast creating stuff for Earthdawn and I like writing swords & sorcery fantasy for Paizo's Pathfinder. I have a special place in my heart for Shadowrun, one of my all-time favorite RPG settings, which I wrote quite a bit for back in the day.

3. THG: Can you tell us more about the team building part of the rules for Icons?

SK:  Essentially, teams are treated much like characters when it comes to their Determination, qualities, and challenges, so players get to share a measure of Determination as a team, but also have to agree on how to use it (a strategy and role-playing element). They also get to define the important aspects of the team: are they "The World's Greatest Heroes" or "Strange Explorers of the Unknown"? Do they have a team arch-nemesis? Things like that.


SK: ICONS is designed more for quick pick-up-and-play games than long-term series play, but you can use the game for a series. There are optional advancement rules, based on the GM increasing characters' starting Determination values, and players having the option to "spend" some of that value on improvements in various traits. It's very simple and the game isn't particularly focused on the kind of "journey to a pinnacle of power" that you find in, say, level-based RPGs like D&D.


SK: Easy enough, I hope! One way it should be easier is the GM rarely has to roll dice in ICONS: 95% of the tests (die rolls) are made by the players. It's not about whether or not a villain's attack can hit the hero, but can the hero avoid it? So the only tests the GM needs to roll are those made in secret for the heroes, where the players don't know the exact outcome. Otherwise, the GM never needs to touch dice while running the game. This frees some GM-time up to think about bringing challenges and other plot elements of the game into play.


6. THG: We’ve seen several examples of heroes as represented by the character template used in Icons (check out the examples here, here, here, here, and here . What’s your favorite hero you’ve seen imagined in the system created by you or a playtester and why?

SK: I used the Mighty Saguaro, the Man-Cactus, in an early example discussing the game because I was really struck with how whimsical and creature he was, but also how his player would not have come up with that particular character just sitting down cold at the time. Part of the playtest process was having players go through character creation, then seeing them work with what they got, coming up with a story and aspects to tie it all together. It's a really creative experience.


SK: My ICONS get is just getting going again, but it's pretty much the disparate gang of heroes dealing with typical four-color comic book villainy. I'm looking forward to play-testing the promo adventure I'm writing for the folks who pre-order the game with my group.


8. THG: What comics are you reading nowadays?

SK: Like a lot of people, I read more graphic novels and trade paperbacks these days. I'm a big Astro City fan, and I've enjoyed Gail Simone's run on Wonder Woman. I've been enjoying Blackest Night (although I'm ready for it to wrap up) as well as Geoff Johns' Green Lantern run. I may well be the only person buying Doctor Voodoo (THG: image borrowed from Ifanboy), Avenger of the Supernatural, but I've found it to be a surprisingly good book.

SK: DC these days, and I've tended to be more of a DC loyalist, but I've got to say it's much more a matter of good comics than anything else. I think Marvel's first few years are one of the high water marks of the Silver Age, and I love a lot of Marvel stories and characters.


10. THG: Where can my readers buy Icons and other products of yours?


SK: Folks can pre-order ICONS from the Adamant website. You can find some of my other work at the Green Ronin online store, Paizo online store and at DriveThruRPG. Thanks, Paul, and good gaming, everyone!


We'd like to thank Steve for taking the time out of his busy rpg-building schedule to answer our questions and would urge everyone who may be interested in Icons to check out their amazing preorder offer at Adamant's website. Check out this insane amount of value for $29.95:
Great Scott! 'Nuff Said.
Posted by The Hopeless Gamer at 6:16 PM