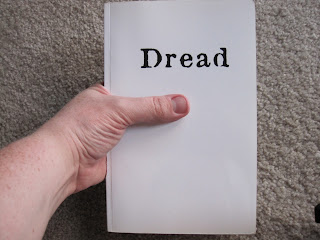 No matter what you've heard about Dread I guarantee you this: as a game, it will deliver a good time. Above all else, Dread creates an environment and conflict resolution system that keeps you on the edge of your seat. No single test is frivolous or out on its own with little impact on the greater story. Every action you take affects the plot and those around you.

Intrigued yet? Wondering why it looks like I have a deathgrip on the book itself to the right here? Keep Reading to find out more about this unusually excellent horror game and what I'm hiding underneath my hand! 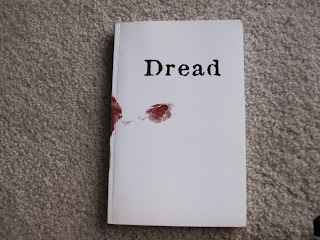 Dread is a very simple game. There's no dice, no numbers, and no stat blocks at all. However it's not what Dread lacks that makes it so awesome. If you haven't heard of Dread before, here's the bloody hook that brings players back time and again to this fun little indie game: instead of rolling dice to see if you succeed at some difficult challenge, you pull a block for a Jenga tower that is the shared lifeline of all the players. If the tower ever falls down, the player who last touched the tower has wrought a terrible fate for their character (usually death, but sometimes worse). The GM never touches the tower. 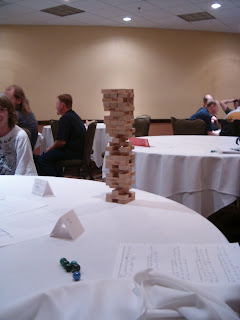 As a mechanic, utilizing the Jenga tower to resolve something a character couldn't normally do is just brilliant. The entire intent behind Dread is to replicate the tension developed in a really good (or cheesy) horror movie. We've played a ton of different games of Dread over the years with several different GM's. Each time the GM brings their own spin on the horror genre to the game depending on the kind of horror games they like.

We've played 80's slasherfest, psychadelic Hastur-inspired Lovecraft horror, a Buffy-style high school horror game, and a late 90's self-aware game. Each of these games have been equally compelling in their own way even though the types of suspense and horror generated vary quite a bit. The tower is versatile in its story-telling capabilities.

What kind of tension is pulled out of the tower? Let's take a step back. First, players must follow the rules of Jenga proper when making a "pull" from the tower. The GM can ask a player to make a pull at any time to succeed at something they're trying to acheive. Players may also elect to make extra pulls in order to better prepare for something or even pull something out of their purse they didn't even know was there at a crucial moment. ("You think you have a silver cross in your back pocket when the vampire rushes you? Make a pull and see if you're lucky.") Alternatively, in a time where the tower has gotten too tall and too unstable and you just don't think you can pull, you can always heroic sacrifice to knock the tower down and acheive something truly epic. 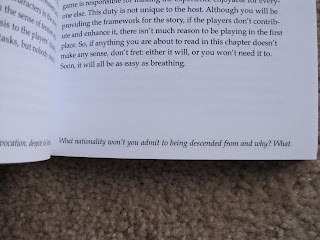 But how do we decide if your character could free himself from the grip of the giant werewolf breathing down his neck? Instead of traditional character sheets, the GM prepares questionnaires for each player to match the scenario. Each questionnaire consists of 10 to 15 questions (with the ultimate question always being "what's your name?") that are designed to give the player some tools to scuplt their character. Archetypes are usually assigned each questionnaire so players know what they're getting into. Titles like "The Jock" and "The Preacher" give you a quick stereotype to get yourself in the right frame of mind and then twist the trope in your own way.

This may sound like a daunting task for the GM, and sometimes it can be, but the best way to look at the questionnaire is to use it as a tool to create all those hooks and connections to the story and within the group you always wanted to. Go ahead, make two of the players married or another two twins - it's completely up to you. The players have to answer the question in a way that doesn't directly contradict the premise. It's also not too bad as the bottom of each page in Dread is a running list of questions GM's can include (see above and to the right there). It's a great way to randomly add a couple of questions to an almost-complete character concept and is a very nice little touch the author threw in. 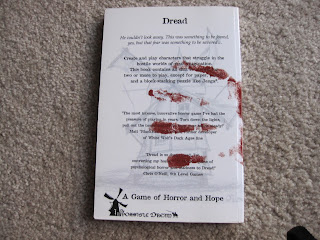 The book itself is very nice and worth every dollar of the $24.00 cover price. The creators did a great job of using the stoic nature of the horror genre to create a very bleak product. I've even used the book itself as a prop in a rather meta (and not 100% successful) complex experiment of a scenario. Take a look to the left for the backcover. The tiny splash of red on both the front and back add so much character to this little horror book.

The pages are a non-glossy stock, and the rest of the book is in black and white, but you're really not buying Dread for how it looks. This thing is thick with great horror role-playing tips and tricks. Considering how light the actual rules are, and that the book weighs in at 167 pages, it's safe to assume that it's one of the best GM guides to running a horror game out there. Yes, a lot of the advice specifically supports how to build tension using the tower, but if you want to run a horror game, tension-building should be a main concern. 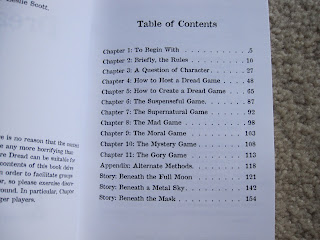 Take a look at the table of contents here to the right. You can see that the first 86 pages focus on planning, playing, and running a Dread game. This first half of the book is full of innovative ideas on how to create suspense, conflict, and cooperation between your players. The most brutal set of rules in the book is for PVP conflict. It's pretty straight-forward: the two conflicting players pull from the tower until one quits the contest or knocks the tower over. PVP starts to get real personal real quick when the tower is creaky and unstable.

The second half of the book includes vignettes on running several different kinds of horror games that focus on the overall feel of a game rather than a given genre like serial killer or monster. I've turned to these chapters on several occasions when planning a game just for the helpful advice listed within. The end of the book includes three Stories (Dread's name for adventures). The three stories provide a beginner, intermediate, and advance look at stories in three different genres (monster, aliens/sci-fi, and 80's slasher fun). All three scenarios are great in their own way, and we've had fun with each of them. They do a great job of preparing you to host your own Dread games and give a good feel for how often players should be making pulls. 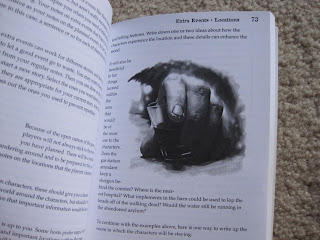 Rather than looking at what Dread does wrong, let's look simply at what Dread doesn't do. I'm taking this approach as the game tends to deliver exactly what it's designed for. First, don't buy Dread if you're looking for a gorgeous book containing lots of inspirational art. Yes, Dread does have some neat atmospheric art (take a look to the left for an example), but it's all black and white, and the art is not a focus at all.

Another aspect of gaming that does not shine in Dread is sustained campaign play. Dread is the quintessential horror one-shot game, even moreso than Call of Cthulhu. The game is deadly, Total Party Kills are not uncommon, and suspension would need to rise and fall quite tensely every session. You'd need to be able to make sure you got a full story (or chapter I guess, in this case) in each play since saving the tower for the next play is pretty much out of the question.

The big caution here is that Dread takes a play or two to really wrap your mind around it. It's a very different game from traditional RPG's. Pacing is more important in Dread than any other game, and the GM will need some breathing room to get the amount of pulls required just right. It might not work every time - some times it'll be incredibly deadly while others it'll be a walk through the park - but when it clicks it's golden.

Hope you enjoyed the review, and if you're wondering where to go next, I've got some links for you! First you should go check out The Impossible Dream to find and download the quickstart rules. They will literally get you started quickly and are enough to play your first game. Then go back (or start here, they need your support!) to their site to buy the book or purchase the pdf. Looking for a scenario to play? We posted one yesterday, but make sure to come back often this week as we continue to explore Dread, relate some of our best experiences, and provide you with some more fodder for you to use in your own games! Tell your friends!
Posted by The Hopeless Gamer at 5:30 PM