Gaming on the Cheap - Figure Stand-ups 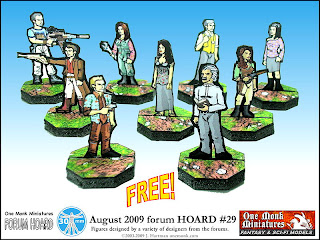 We got into the gaming hobby almost 10 years ago because of a little game called Mage Knight (MK). MK was a prolific miniatures game produced by Wizkids that revolutionized the way gamers were able to get minis. It was the first truly successful collectible miniatures game, and for the time it was made, it was also the quickest and easiest minis game to play on the market. I won't go on and on about MK here, that's probably another article for another day, but what I can say is that MK taught me very well that minis, as awesome as they are, come with many pitfalls. Let's take a look at some of the big ones.

1. Storage - this is the biggie. It's not so bad when you get miniatures in a game like Tide of Iron or Starcraft. For as many minis as you get in these kinds of games, there's always someone out there who has figured out exactly which Plano storage box will do the trick. For minis games you don't have a confined box and, more importantly, the minis are usually in a bigger scale. You end up having to decide if you want to make your entire collection transportable or just take what you're going to play + trade (if it's a collective game) on game night to the local store. There are lots of storage solutions, and it really depends on how nice you want to keep your figures, but they're all bulky. In the end you have to put these containers somewhere. 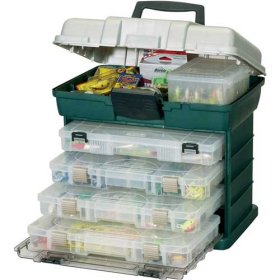 2. Painting. A lot of collectible games used to come pre-painted. I could be wrong, but I believe Heroclix (also produced by Wizkids) and D&D minis are the only current games producing new pre-painted figures. Of course you could always go back and look at the extensive list of fantasy figures available from Mage Knight or D&D, but these mostly go for unique hero-types largely. Some people actively like to paint (like the other two writers on this blog for instance...) but for the life of me, I'm not sure why. For those of us who are non-painters or just don't have the time to paint up an army of evil orcs or a troop of evil traveling carnie-folk, painting up your minis can be a chore and add a ton of work to a GM who probably already spends too much time working on his scenarios every week.

3. Selection and Price. Minis can be extremely expensive. There's a reason companies like Privateer Press and Games Workshop can turn a profit - it's because they make good money on their minis. Of course you always have the alternative cheap option like Reaper Miniatures, but then you still hit the painting issue (for the most part, I realize they have a small selection of prepainted minis, but the selection is small). There's also the fact that, unless you have a very well-stocked minis game store in your area, you have to order online. Obviously this isn't a big deal, but it takes something out of the experience of finding that perfect mini in your friendly local game store.

So it really seems like I'm trying to convince you to give up plastic or pewter minis all together, and that's not the case. Of course there will be some games which make the minis worthwhile. I couldn't imagine trying to play Warmachine or Hordes without the awesomely huge warjacks and beasts running around the battlefield, but I have a hard time imagining an RPG that specifically requires the use of minis available on the mass-market. The only exception I could think of might be Star Wars, and that's only because there are so many minis out there, and everyone loves Star Wars. Duh. 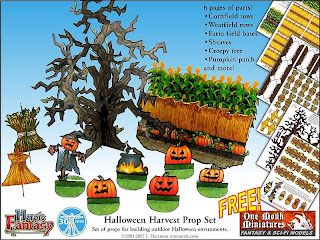 So outside of the random mini war game and Star Wars role-playing, I guess my point is that there is an alternative to actual minis, and that is the phenomenon of "stand-up's" or paper minis. Sometimes also called "paper dolls," these minis come from a pdf or similar file that you either pay for (cheaply, but I'll get to that in a second) or find for free online, print as many copies as you want in your own home, cut out and construct however you want (and I'm hoping TheBro will provide an article in the future similar to his first article on Print and Play game Zombie in my Pocket), and then use! All the pictures in this post are of such mini's - aren't they nice?

There are several advantages that stand-ups have over 3-d miniatures. One would be the cost. It's very easy to find stand-ups for free (legally) online as a lot of people are able to produce these and are happy sharing them. You'll see at the end of this article a list of places you can find free mini's. Another advantage is the storage. Because these things are generally thin, they're stored much more like cards instead of miniatures. Any Magic: The Gathering player can tell you that they can store a couple hundred of cards easily in a binder and throw it in their backpack for some Friday Night Magic. Ever try to make a couple of hundred minis mobile without having both hands full with a couple of tackle boxes each? Not an easy thing. For stand-ups, you just need a bag of little plastic stands to insert your minis in (these are smiliar to many board games and can actually be pilferred quite easily from these games) and basically card pages if you want to keep them nice and unbent.

Stand-ups also have the bonus of being able to produce as many as you need. You control how many minis you have based on how much you want to print. Of course the materials that go into making the minis add cost: ink's not cheap, but this is part of the way you control the cost as well. Did one of your paper minis tear and lose an arm? Did you just figure out that you need a couple extra dozen goblins for that big climactic battle tonight? Just go back into the pdf and print a new page or two - no problem! 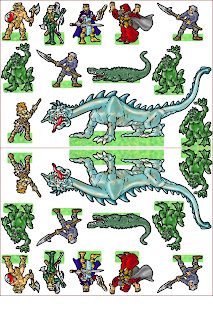 I also like paper minis because, while I like to think of myself as creative, I have very little artistic talent. This harkens back to the fact that I'm not much of a painter and I don't like spending a lot of time doing the mediocre level of work I'm capable of to paint up all the minis for my games. Stand-ups have already done all the work for you. You've got the designs done, they're full-color (or not if you don't want to use the ink!), and there's a huge selection to choose from both free and available to purchase. This does present one drawback though - it's incredibly difficult to customize a mini that you like to make it fit exactly. There's really not much you can do once the mini is printed. Oh, but wait, why not design your own paper minis? Even people who like to be artsy can get behind paper minis.

If I haven't convinced you to give paper minis a try, I'm not sure what will. There are so many free options to at least print a page and see if you like it. I'm planning on finding some game-appropriate minis to use in my Day After Ragnarok Savage Worlds game coming up. When I do, I'll make sure to take pictures for an edition of Friday Nite Gaming so you can all see what they look like in action on a game mat (I'm using Flip-Mats as they also are cheap, easy to store, and offer a wide variety of options - see a trend?).

Here's some resources to start your paper minis collections. If you don't find what you like here, keep searching as I know it's not even close to an all-inclusive list - it's just a starting place.

One Monk Miniatures - they offer primarily minis that you can buy at $1.00 a page but also have a full page of free minis to use (which you can see some pictures of in this post like the Firefly crew at the top). I really like the art style of these minis.

Savagepedia - the Gaming Aids page has a list of free "figure flats" as they call them where I've found a huge selection of free minis that are currently sitting on my hard drive. There is a large variety of genres to choose from to match the large variety of games you can play with the Savage Worlds rule set.

Icons Preorder - If you read my interview with Icons designer Steve Kenson, you'll notice that Adamant Entertainment is offering a special preorder deal when you order Icons from their site. This deal includes stand-ups as a part of the deal. We don't know what they look like quite yet, but the art will be matching the art of the book, which is a great kind of DC animated universe style like the great Batman: The Animated Series.

RPG Now - search for figure stand-ups, paper miniatures, or just search through the RPG accessories and you'll find a lot of choices there. They're a little more expensive than One Monk at times, but offer a huge variety. RPG Now is a site made for making pdf file gaming accessible to the masses, so this is a good choice if you're looking for something specific.

Like I said, not a comprehensive list by any means, but it's a good start point. I would encourage any who know of other minis (free or available to buy) to post a comment here to share with everyone. Just make sure it's legal and not gonna make a pirate (the bad kind) out of anyone!
Posted by The Hopeless Gamer at 12:31 PM