Gencon Follow-up: My First Time in the Iron Arena! 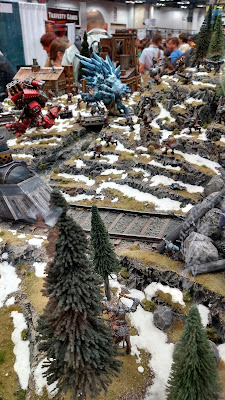 If you were following a bit of my run up to Gencon posts, you might have noticed that within the last year I've really gotten back into Warmachine with my brother. Luckily for me, I had pretty much hung on to almost all of my minis from the Mark I version of the rules, including Cygnar, Trollbloods, and Mercs (mostly dwarves). Of course that didn't stop me from picking up a small force of Retribution (elves) as well, but that's more of a digression at this point.

We decided that we were going to try to play in the Iron Arena this year at Gencon. We had spent the last year playing between a half and full dozen games against each other trying to brush up on the rules, and we were having a TON of fun with it. Lots and lots.

Let me go over the format real quick, but Iron Arena is a unique way to play the game. Basically you purchase a ticket for the entire day (or days - 2 in our case). You report to the Privateer Press area and register yourself and what state/country your from. This part is important and you'll see in a bit why.

Then you play pick up games pretty much the whole day with other Iron Arena contenders! You can play any faction, any size game, any number of players, whatever your heart's desire.

For each game you play, for every hour, you can report the results, and you end up gaining skulls. You can earn skulls for playing 50 point games (the tournament standard), a fully-painted army, for playing on a scenario table, for playing someone from a different state or country from you, for playing an army composed of forces specifically designed for your warcaster/warlock (known as a "tier list" which basically grants special rules for your army on the condition that you limit the units you can build your army with), and several more things.

You can then spend your skulls on items like art prints, dice, measuring templates, and in the most skull-intensive items, "extreme" alternate sculpts of big models. It's a pretty great selection.

So the strategy here is two-fold. Obviously you want to play a fun list because all these games are for-fun. The other half though is to figure out how to maximize your skull income. That leads into the prep work for the con!

I've never been a big hobbyist when it comes to minis games, but something just clicked for me recently, and I've really taken to the painting/modeling aspect of the game. I decided that I would stick with just Cygnar and would play an entirely painted army. I couldn't make tier for my warcasters as I didn't own the right combination of figures, but everything was painted!

So I ended up only playing two games on both Friday and Saturday, but you know what? I was pretty psyched about that. I didn't win a single game, although three of the four were very close, and I feel like I picked up a lot of good basic information about playing the game. I'd love to play more games in general, but unfortunately the nearest game store to me is 45 minutes away and they don't stock Privateer Press products, but again I digress.

My first game was actually against my brother's army, but this time was different because it was on a table to match the awesomeness of our fully-painted armies! 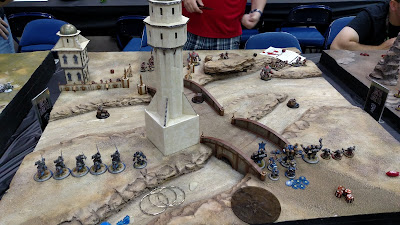 Here's a view of our table after we got set up. I was trying a new army (relatively) because I thought why not? It was against the Gamer bro, so if I lose, I lose, no sweat. It was a fun game where we were playing for three objectives, and we didn't learn until after the game that we had been playing objectives wrong for going on several months now. Never too late to learn how to play the game you've sunk hundreds of dollars and hours painting on! 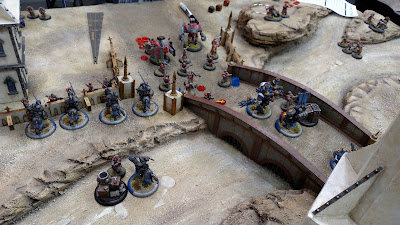 You can see in the picture above that things got heated! I was playing an army with lots of warjacks (basically robots telepathically controlled by my army's warcaster) with just a bit of support from some heavy cavalry. Against me was an infantry-heavy army of pseudo-fantasy Soviets! I lost on scenario points, and again, afterward we learned that we had no idea what we were doing in the scenario. Next time fantasy Soviets. Next time.

The second game on Friday was on a different scenario table, and this one was going to be awesome! I was playing a nice guy who was playing a Retribution of Scyrah (elves) army, which I was really excited about because I love the faction. 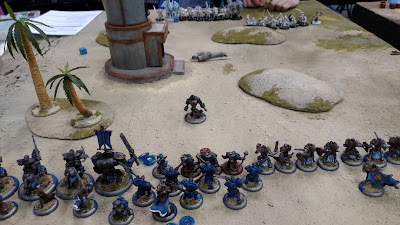 In the middle of the table was a big lighthouse, and the scenario took place at night time. Each turn, the active player rolled to see which quarter of the table actually had light. Every other quarter was in darkness, and you couldn't see anyone more than 5 inches away. It was a ton of fun, He was playing mostly a melee army like myself, which meant we were going to get into a scrum real quick. 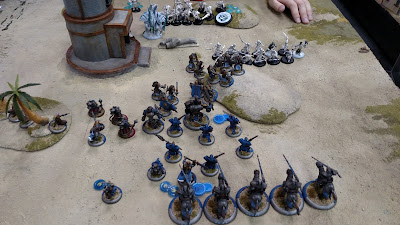 In every game I played, I used a full unit of five stormlances a.k.a. heavy cavalry. They were REALLY fun to play. They were incredibly fast, and I often used my first turn literally re-positioning them across the other side of the field to deal with a threat and didn't feel like I was wasting any time at all with them. I ended up losing this game because my warcaster blew himself up. This isn't a general rule or possibility. My guy (Lord Commander Stryker) has an ability where he can boost his own damage output in exchange for taking damage, both determined randomly. He got a little ambitious and killed himself while attempting to kill the enemy warcaster, losing me the game. Ton of fun though.

My first game on Saturday was also on a scenario table, but this time was against Trolls! My opponent was playing a special tier army called "Runes of War", and if you're familiar with the game, you know this is one of the top-tier tournament lists in the game. My opponent explained that he was going to play in an actual tournament but changed his mind at the last minute. 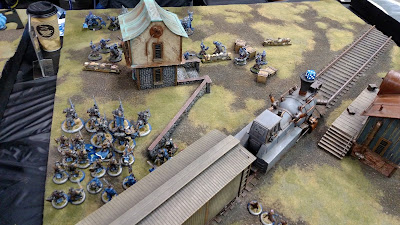 Take a look at that train above here. The scenario had me as the defender of the train, which turned out to be terrible for my infantry-heavy army I decided to play in this game. Really in retrospect I should have played the same army from the first scenario, but this was the army I had played the most and wanted a chance to get some more games in it. 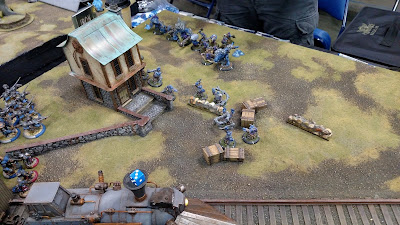 This turned out to be a big mistake as my army got crazy bunched up because I had no room to deploy in the first place. I don't know if it would have made a difference against Runes of War, but I would have felt like I had more options, I think. Regardless it would have been rough.

It definitely put me in a sour mood, but eventually I got into my fourth and final game, and that was a different story altogether! 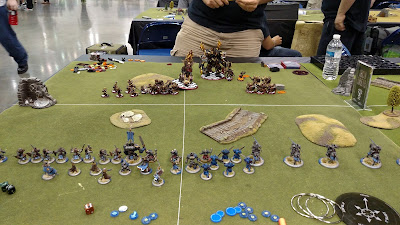 Take a look at his army set up and guess which ones were the big ones (hint, they're the huge center pieces). I was a little nervous playing against Menoth as that was the Gamer bro's faction in Mark I when we played before, and I could never beat him with my boys in blue.

I knew his army was all about the fire with area of effects carpet bombing and sprays, all of them causing fire on my guys even if they didn't initially do enough damage to kill them. I again was playing my Lord Commander Stryker army with tons of infantry. Not necessarily a happy combination as infantry burn real good.

The game was probably the most fun game I played all weekend. My opponent was a seasoned press ganger (the volunteers that run their games and recruit new players), so he was just kind of bumming it in the Iron Arena to see if his army would be good for tournaments. He also explained that he had not lost with the army yet. In a way, that's a nice relief of pressure.

The game actually went pretty well for me. Again my cavalry were heavy hitters, and my sword knights, usually pretty squishy infantry, held up surprisingly well against the holy flamethrowers my opponent deployed.

I had taken out about half his army and still had some killing power, so I decided to go all-in to kill his COLOSSAL warjack with Stryker, my warcaster. He went all out and killed the thing in one turn. It was fantastic. Stryker went down to his own warcaster, but it actually got a little close for him, which was good enough for me.

As a first time in the Iron Arena, I was very happy with the games I got in. Time flew by at Gencon on both days almost too fast, and with only two games each day, that definitely surprised me. I'll have to do some thinking again next year to see if I just want to outright devote a single day to the Iron Arena and try to get in 3+ games in one day or spread it out again. I can pros and cons to both, but I'm definitely going to be fighting in it again next year.

Posted by The Hopeless Gamer at 7:48 PM