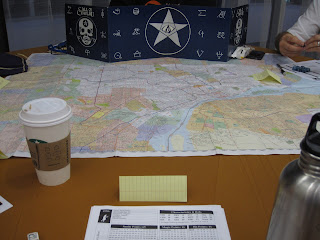 I've got a ton of pictures to share in the next couple of posts to wrap up Gencon 2012, but before I get going on a roll, I thought I'd write a quick bit about my experience and share some of the random pictures that don't fit anywhere else!

I can't convey what a great time I had this Gencon. It was number 12 for me, and the last couple of years have been a little lackluster. Honestly, it's taken me a few days each for the past couple of Gencons to finally relax and enjoy myself. This year was all different however. While it started out a bit of a nightmare, it set the tone for a whackier, less structured vacation experience, and I feel I benefited all the more from it.


The wife and I didn't get into Indy until after 2:00 AM Thursday morning. While the drive made us both a little loopy, but we were all the better for it. Taking our time Thursday morning (after about five hours of sleep) before getting to the hall was actually a very nice change of pace. Because I have a press badge (and have for several years) I usually try to make my way to pick it up early Thursday morning so I can get into the hall an hour early on Thursday. It just wasn't a priority this year, and it helped me feel much better about covering the con while still enjoying it and not pushing myself. This is my vacation after all!

I got to play a couple of great games this year, although not all the ones I expected. I ended up playing two separate sessions of Call of Cthulhu, one brief session of D&D Next (my first real exposure to the game, more on that much later!), and one fantastic session of Fiasco. It was a set of great, diverse play experiences. The picture up top is from our first game of the con - 1920's Cthulhu set in Detroit. I was the "face" of the group of mobsters and had a truly great time hamming it up seducing any lady I could. 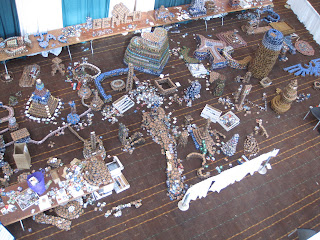 One of the things we look forward to seeing every year is Cardhalla. It's mesmerizing to see it grow through out the course of three+ days. The premise is simple - it's a house of cards on steroids. People spend hours and hours building castles, towers, and original designs for one purpose - durability. You can bend, tear, stack, whatever you want to do to build creations. The builders are truly inspirational. The wife and I picked up her badger after getting to the hotel late Wednesday/early Thursday, and when we walked into the hall, there were at least four people already hard at work building temporary masterpieces at 2:30 in the morning. All the effort goes toward an amazing cause, but I'll talk more about the auction in a later post.

I really valued the time spent outside of the vendor's hall, but this year did have some exceptional things revealed. I'll go into detail on some of the bigger batches of stuff shown off, specifically for Fantasy Flight Games, but I want to highlight a single product that, had I been able to afford it at the show, would have been the prized piece of swag of the entire convention. 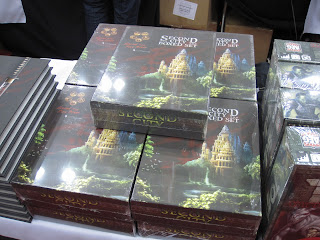 I could (and have) go on and on and on about the ridiculously-high production value AEG puts into Legend of the 5 Rings 4th Edition RPG. It's a gorgeous, high-quality set of game books and products, and with the Second City box set, the first released for this edition, sets a new bar for what I consider to be the most impressive game line in print.

At $80.00, it's easy to balk at the price, but once you pick the box up, you'll know they packed it tightly with value. There's just too much in there to describe in my post, but needless to say, if you're actively playing the game, you'll quickly get your 80 bucks out of it, and then some. 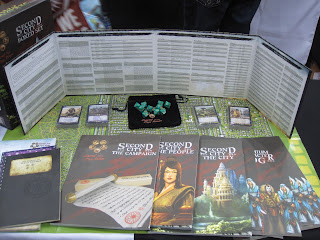 With player aids, new books for the setting, in-game artifacts to give out, and a pretty map, a GM screen is the icing on the cake. All players - both GM and otherwise - will get something out of the box. Were I actively running a game, I have no doubt that I'd want this in my collection. As I'm just a collector/reader of the books, it's something I hope to pick up for slightly cheaper down the road. Did I mention the cool set of clan d10's you get? I didn't? Well, now you're covered!

Overall it's the product that blew me away the most at the show, and I have a hard time picturing a box set that could beat it's quality and content.

So that's all I've got for now, but I know I'll have more in a day or two to share with everyone. Like I said, it was a wonderful Gencon, and for the first time in years, three days after the show is over, I'm already starting the countdown to next year's con. Come back soon for more reflections and TONS more pictures!
Posted by The Hopeless Gamer at 9:14 PM

Email ThisBlogThis!Share to TwitterShare to FacebookShare to Pinterest
Labels: All Things Gencon, L5R