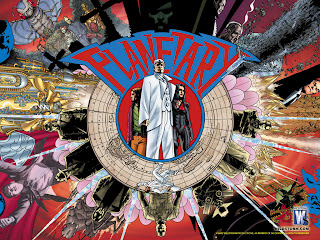 I've been re-reading Planetary by Warren Ellis and John Cassaday in anticipation of the final trade paperback making its way to my door from the far-away lands of Amazon. Planetary is one of my favorite comics of all time, and as complex and unique it is, it's actually pretty easy to sum up the plot. A group of three super-powered individuals work for a mysterious organization called Planetary. The romp around the planet and the multiverse essentially discovering comic book tropes in their own world. Its Warren Ellis' playground to explore all the things that make comics great from horror comics to John Constantine (a character Ellis wrote for at one point) to pitching a battle between a WWII style League of Extraordinary Gentlemen team and a clear JLA analogue. The real villains behind the series are even a beloved superhero comic mainstay, and man, they are truly evil bastards. But how do we game?

Well, apart from recommending you pick up Planetary, I also want to through an idea out there of how one would play a Planetary tabletop game. The inclination here might be to play it as a straight superhero game, and you can definitely go that route. Think Icons with a team that focuses on investigating weird phenomenon. Instead though, I'd run it with a generic system like GURPS (probably not GURPS for me cause I'm not crazy about it, but it's got "generic" right in the title), Savage Worlds, or Basic Role Playing such as that used in Call of Cthulhu. 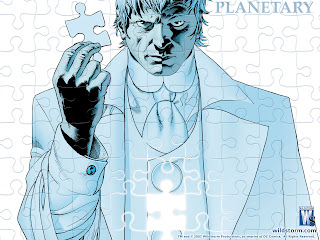 From here you can make your characters investigate literally anything. Stick to the multiverse concept where anything can slip into our reality, and you're really cooking. Again, you could stick to just exploring different different comic tropes like Ellis does in the comic book, but why not spice it up? You've got a team of investigators investigating strange tropes presenting themselves as natural phenomenon in the world - why not explore different gaming tropes? One week your players could be walking into a horror game, the next they could run into a group of medieval adventurers entering a giant dungeon. The surprise of the flavor of the game would be half the fun in this kind of game.

Really it all boils down for this for each and every player character - curiosity. They could all have different motivations for what spurred their curiosity, but ultimately they all have to want to find out what weird thing is right around the corner and solve the next mystery. It has to be their passion. One of the reasons I started this blog is because I was hopelessly outmatched by the number of games I want to play versus the amount of time I have to play them (hence writing about them on top of play time), with this style of Planetary game, just start at one end of your gaming shelf and play a new book, a new setting every week using your universal rule system. An added bonus is that it should be extremely easy to switch out GM's as well with a floating rooster for your very own Planetary team.

Posted by The Hopeless Gamer at 5:27 PM