Call of Cathulhu, Part 1 of an Origin Story 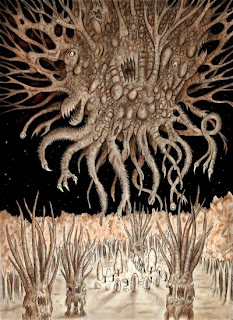 This is something dumb I made up. It's a bit long for the main page, so I split it up, so there's more, just keep reading! I'm planning on posting part 2 tomorrow. Hope you enjoy it, and for those of us in the midst of this eldritch abomination of a blizzard, stay warm!

There is a being older than time. She, if you are so bold as to attribute gender to her, is a fractured entity. Torn apart across the faceless eons, she has been born and perished a million million times throughout history recorded and otherwise. Before her shattering, she ruled all in existence that did not live. Wilderness, rock, and the dead spirits of all things were her domain. Her monarchy was a cruel thing as she tightly grasped all she saw before her in her countless tyrannical appendages.

The other old things of power grew jealous of her reign. Whether their domain was over the creatures of the sea, the crawling things of the dirt, or the fledgling tribes of humanity, all that lived would too soon fall under her domain and eventually join her realm to do with as she pleased. They grew fearful for themselves. Even those who would be gods could die, and they would devise a plot at any cost to avoid bending the knee to the cruel mistress of all-that-isn't. Hundreds of beings each mighty in their own right, and yet meager compared to the great queen, banded together in an effort to destroy the queen. They risked anarchy amongst the dead, but sleeping things, but they cared not what their actions would bring.


After countless years of debate amongst the great rulers of all-that-lived, they made no progress in their plotting. Mis'kr, queen of the flying creatures favored a plot to gather their forces and peck the many eyes out of the great ruler so as to blind her. The others dismissed this as a fool's errand as she looked out with more eyes than stars in the sky, and they would surely be ruined in the old matriarch's flailing. Rossum, queen of the crawling things of the dirt suggested all the living creatures submit to her clans and arrange themselves as if huge hives to assault her wave after wave with their mighty host. The others made a point that no matter how large an army they could muster, the beast would surely out-number them and in fact grow stronger the longer the war was waged. No, a frontal attack would be impossible, and it would simply work to doom them all that much quicker.


Then Barnible, the great lion of the plains and indeed king of the earth's pride spoke. Shaking out his vast mane in disgust of these lesser creatures, he stood firmly in the authority only a true master of the hunt could possess.


"You are a foolish bunch of dolts. How you kept your kingdoms for so long is a mystery that confounds even the most cunning of predators. The Eldest's strength lies in her skill of warfare and her brutish manner that ever keeps the dead in their realm and the very earth we pounce across from rising against us in revolt. Truly she is a creature to be feared and respected."


Then spoke Grishla, the great mother bear to all of her kind. She alone could speak for both the eaters of flesh and the grazers of leaf. Her esteem almost rivaled that of Barnible's.


"What do you propose then, great hunter, if not an assault upon her terrible and mighty body itself? How else are we to avoid our inevitable servitude to that which has no name yet, in the end, rules over all things?"


"Simple," stated the great cat, "if her current form permits no treason, then she must be transformed. And moreso, she must choose to change herself as none of us possess the power to bring about such ruin."


Grishla replied, "And how do you propose to convince her to willing thwart herself and sacrifice the impossible power she currently holds?"


"You are truly a lumbering, sleepy creature with little wisdom," spoke Barnible, "for the answer is simple to those with wit enough to grasp it. The great mother of all-that-isn't must be tricked, and more importantly, harbor no suspicions of deceit before the trap is sprung."