Your Zombie Survival Plan Will Fail. 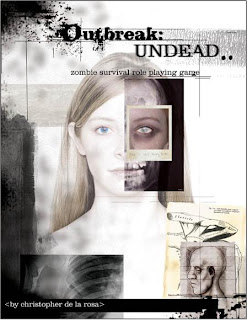 This was the slogan that drew me into the Hunters Games booth down entrepreneur’s alley this past Gencon. I mean, who doesn’t have a game plan in mind in the event of a zombiepocalypse? (Mine involves a trek to my sister’s cabin in TheMiddleofNowhere, Northern Wisconsin – you’re all invited!). Outbreak: Undead is a self-proclaimed “Zombie Survival Simulation RPG” that allows you to play as yourself (take the 40-question self-assessment at the Outbreak Undead site for your stats) and test your mettle in realistic zombie scenarios.

Trust me: this is no superhero He-Man game where you’ll be taking down hordes of the undead solo. The creators consulted real-life experts in firearms, survival, psychology and search and rescue, and included variables such as panic, pain, and empathy to create as realistic a system as possible.

My personal preferences usually steer me more towards board games and rules-lite RPGs (like Dread, Fiasco, etc.), but the basic premise and the production quality of the core book proved too much for me to resist. This is the first RPG I’ve ever picked up on my own, unbiased and unswayed by my gamer husband, and I was surprised to hear that he hadn’t even heard of it yet (you better believe I savored that moment!). Turns out this was first premiered at this past Gencon, where Hunters Books received a Gen Con Marketing Fellowship Award for new entrepreneurs.

The price point of $45 is a steal for this hefty 450-page hardcover core book, which includes player’s guide, GM guide, and zombie guide. The production quality was one of the big motivators for me to buy, and words really can’t do it justice. Seriously, this book is SOLID. The design throughout is set up as a sort of zombie field guide, with pencil sketches, handwritten notes, and Polaroids to give an authentic feel.

One area in which I felt the core book was lacking is the use of examples. This is odd to me, considering that this is an area where the quickstart guide (also available for free download on their site) really shines. When describing combat rules, in particular, the language in the book gets a little murky at times. If nothing else, the book could benefit from having the quickstart guide included right in it (what's another 13 pages, after all?).

The core book provides the tools to stat absolutely anything you can think of into your zombie outbreak – and I mean ANYTHING, including entire chapters dedicated to vehicles, equipment, and different types of zombies. You say you want to hit that zombie elephant with a frying pan, while wearing a polyester pantsuit? Go ahead! (Though I really wouldn’t advise it!) Being a new game, official supplements like GM screens and player aids are still under development. However, the forums on the Outbreak Undead site provide sneak peeks of materials in progress, an ever-growing amount of user-generated content, and a safe and friendly environment to ask questions (EVERYONE is still learning, so no elitist rules lawyers here!).

It was the level of detail and customization that really drew me to the system in the first place, but unfortunately, it’s also this level of detail that makes it a little less accessible to inexperienced players and GMs like me. I recently GMed the Gencon Premiere Pack scenario available on the Outbreak: Undead site (look forward to a future article about our experiences!). We had fun, but overall it really seemed that to run a session that’s even mostly faithful to the system, you need a GM who’s able to commit serious time to learning it inside and out. To run a session at ALL, you at least need a GM who’s relatively experienced and quick on their feet (I am neither of these, and our game was a bumpy road, to say the least).

Don’t get me wrong: for what it is (a hyper-realistic, simulationist zombie outbreak survival game), it’s exactly as complicated as it needs to be, and anything less would diminish what this system sets out to achieve. If you can dream (or nightmare) it, Outbreak Undead provides the tools to make it happen. And once the supporting materials catch up, this will definitely be one to add to your regular gaming group’s rotation*.