Kickstarter's a pretty neat website. It offers creative people the chance to self-publish and get funding to work on whatever makes 'em creative. We like that. We appreciate creative people around these parts. As a small (but hopefully buidling) subset of the website, you can find some games, ranging from card games to tabletop RPG's and even LARP's, on Kickstarter. Today I'd like to take a look at what's currently up and looking for pledges and maybe a cool thing or two that got completed and released as a result of backers pledging their support for these up-and-coming games. Read on to see what odd quirky gems can be found on this innovative website!

Why Teens Love Metal, Gaming & the Occult: a Guide for Parents 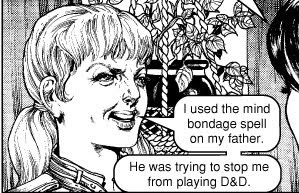 And immediately I start right off the bat talking about something that's not actually a game, go team! In a world where Chick Tracts are actually a real thing (see to the left - it's real), gaming needs all the allies and advocates it can get. I first clicked on this project because I thought it would be in the same vein as the crazy pictured to the left of here, but I was very pleasantly surprised to see that the author, Beth Winegarner is an experienced journalist and author interested in shining light on why all these awesome things (metal, gaming & the occult) are actually good for teens growing up. Go watch Beth's short video describing the book and see if a pro-gaming agenda is something you want to support (hint: it is). Also she has Tolkien prominently displayed on her bookshelf over her left shoulder. That's gotta count for something, right?

Lines of Fire: A Fantasy Battle Board Game 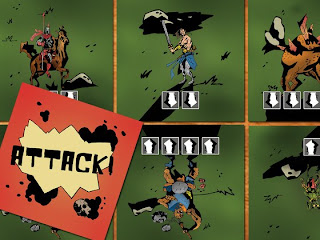 Now I want to show off what looks to be a fun little game with a very modest and realistic goal point. At a goal of $350.00 to produce the game, project manager Jason Tagmire has set a smart goal to get his game produced. This is the beauty of Kickstarter in that it takes just a few people contributing the normal price of a game to get to the point where a completely independent game can get published and released. It's the internet at work - you know when people talk about the internet "democracizing" industries? This is what they're talking about. Lines of Fire looks like a very fun and simple castle-defense style card game. I love how Jason has set up their project website as it gives you everything an investor would actually want to know before committing to funding a project. The game also plays quick at around 15 minutes! And it sounds a tiny bit like Neuroshima Hex! (a Hopeless Gamer favorite)! Pretty neat if you ask me. Urban Fantasy is a big thing right now. From Dresden Files to Neil Gaiman, it's all over the place and has cemented itself as a legitimate genre of fiction and imaginatiating (the act of playing games using your imagination). I really like the concepts behind Whitewolf's Mage and the modern horror game Unknown Armies, and it seems that the folks producing POWERCHORD do as well. I love the evocative mock-up art for the book as seen to the left here. Using music to make magic is as old in gaming as D&D's bard, but it's rarely the focus of an entire product. POWERCHORD runs with the concept, and it's a pretty neat, independent little sourcebook. It's got some time left but it has a long way to go for it's funding to be complete. If you like games like The Dresden Files, Mage, Changeling: The Lost, or Unknown Armies, give pledging to POWERCHORD a shot. 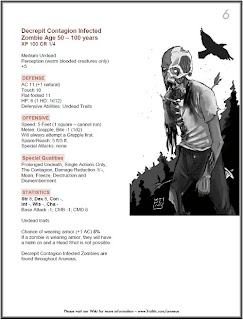 Ben Gerber of Troll in the Corner (seriously, go there right now, it's awesome) is an experienced Pathfinder writer with 11 expansions written for the game. He produced something that will never not be a good idea - zombiepocalypse for the high fantasy game. Aruneus is one of Kickstarter's success stories. It's a good example of what can happen after you've met your funding. If you wrote an RPG, it means you can get on DriveThruRPG and greatly expand your exposure to potential fans. It's good for everyone - both fans and creators. If you're still wondering if Aruneus is right for you, go watch the video. It's a great example of great marketing.


A future in Kicking?

Got a Kickstarter project you're trying to get funding for or just kicking around a Kickstarter in your head? Shoot us an email at thehopelessgamer@gmail.com and we'd be happy to look it over. Diversity in gaming is always a good thing. We like to support good things.
Posted by The Hopeless Gamer at 11:22 AM

Email ThisBlogThis!Share to TwitterShare to FacebookShare to Pinterest
Labels: Boogie Men and Other Terrifying Things, Comics and Supers, Editorial, Indie